EcoVadis hosted an insightful Panel discussion at Le Bourget in Paris last Friday, December 4, for Day 5 of COP21 with close to 200 attendees. In case you weren’t able to make it to Paris, here’s a summary of the insights and discussion from this excellent panel procurement and sustainability leaders: 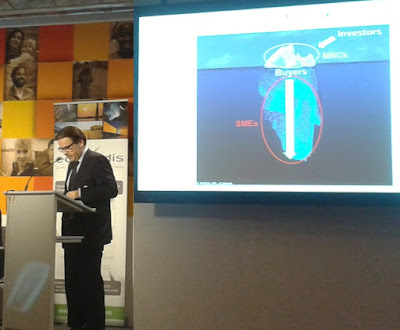 Sylvain Guyoton, Vice President Research at EcoVadis, kicked off the introductory presentation citing a new finding that supply chain initiatives will be the Number 2 most effective strategy for achieving COP21 commitments (from a recent report by GlobeScan SustainAbility).
Mr. Guyoton continued to explain that direct impacts of most multi-nationals are just the “tip of the iceberg” in terms of emissions, and opportunities for gains in fighting climate change. When looking “ across all industries, companies’ direct emissions average only 14% of their supply chain emissions prior to use and disposal; accounting for the emissions in use and disposal of goods would make that percentage even lower” (Plambeck, Stanford Graduate School of Business). With the stage thus set, the panel continued with some challenging questions.
In the following Q&A Thierry Bellon, CPO of Air Fance-KLM described feedback from their suppliers that their CSR engagements was driving them to innovate. 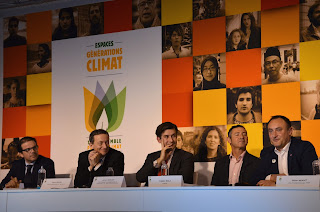 Jeroen Wegkamp, CPO of NS took the floor to answer a question about their challenge with driving sustainability and carbon reductions in the face of competition from electric cars. Mr. Wegkamp explained that in the Netherlands, as in many places, railways have traditionally been the most sustainable form of transportation… until now. Electric cars are bringing a new threshold of low carbon transport. NS sought to act at a much bigger level, to bring the call for carbon reduction at the European level, and at the industry level. They set a goal to be carbon neutral by 2018. To do so, they helped found Railsponsible, an industry initiative in partnership founded by six industry players (SNCF, NS, Deutsche Bahn, Alstom Transport, Knorr-Bremse, and Bombardier). The idea is to make an impact across the value chain and have a global impact.
Next, Mr. Niola, Raw Materials Director at L’Oreal, addressed a panel question on carbon reduction. L’Oreal recently achieved a goal to reduce carbon footprint by 50% between 2005 and 2015. The next goal is to become a “carbon balanced” company by 2020, and sustainable sourcing of raw materials is their key area of opportunity for carbon reduction. In a first example of their initiative, Mr. Niola described a collaboration with a local partner to upgrade the ovens used by shea butter suppliers for nut processing in Burkina Faso, enabling them to cut their wood fuel use by 50%. In a second example, in agriculture in Bolivia, they work with a local NGO to develop a system for recovering quinoa husks (otherwise discarded) for use in exfoliating products. 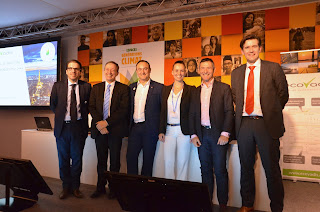 The panel questions turned to SNCF (French railways), where Olivier Menuet, Vice President Energy (previously VP of Sustainable Procurement) responded to a question about how SNCF can go beyond their already low-impact energy sourcing, to network impact. First, he set a goal of reducing energy consumption by 20% in the coming 10 years, which poses huge challenges for services such as TGV (high-speed trains). Could they reduce the speed? Not if they want to satisfy customers. Instead they are innovating. Some examples of areas they are exploring include: friction reduction techniques; investigating ways that the trains can be turned off remotely (since 10% of energy consumed is during downtime at night); lastly they are considering ways to capture and store energy during deceleration on the trains engines themselves (similar to how a Prius generates electricity during braking).
In the second round of questions, Mr Bellon of Air France revealed that a key factor in driving continuous improvement is to ensure that success stories of suppliers are shared among their supplier communities. This brings credibility to the mission and the benefits. The surprise benefit of sustainable procurement initiatives they discovered at Air France? It was the internal motivation and engagement of the team when they participate in these supplier programs, they get a sense of hope and possibility in a sustainable future.
Mr. Guyoton posed a provoking suggestion about the use of direct incentives for suppliers to engage in sustainability, for example linking specific goals such as reducing carbon emissions by 20% could be rewarded by accelerating payment that supplier’s invoices by 20%. Several panelists described similar programs, for example Mr. Wegkamp of NS discussed supplier bonus programs that are built-in to contracts in their green power procurement.
We are grateful to each of our panel members for their generous contribution of their time and energy. If our readers have additional questions for EcoVadis or panel members, click here to contact us. With the ink barely dry on the COP21 agreement, the conversation immediately turns to next steps: How do we...