=
Home » Annual Sustain Conference » Sustain 2018: Now Is the Time to Change the Mindset and Embrace the Impossible
× Share this Article

Sustain 2018: Now Is the Time to Change the Mindset and Embrace the Impossible

More than 500 procurement and CSR professionals along with representatives of international organizations and NGOs gathered for EcoVadis’ annual conference in Paris on April 10-11 to collaborate, exchange best practices and discuss their shared vision for sustainable supply chains. 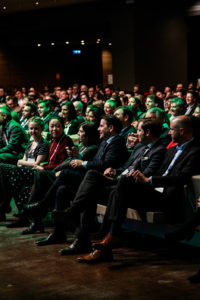 Now Is the Time

The conference theme “Now Is the Time” was present in nearly all sessions and presentations, but perhaps the most compelling call to action came from the first of the two keynote speakers, Isabelle Autissier, president of the World Wildlife Fund in France, writer, agronomist and environmental activist. Ms. Autissier, who has sailed around the world four times and is the first woman to have done so solo in a competition, has a huge interest in biodiversity and has also done pioneering work mapping Antarctic icebergs. She talked with great passion about her experiences around the world and the effect we are having on our ecosystem, and urged the participants to act now as we simply “do not have the time to wait until our children are trained and change the world for us.”

And it looks as though regulations that make it possible for us to act are already in place, or are being gradually implemented. Alyson Slater, chief engagement officer at Global Reporting Initiative pointed out in a panel discussion that some 450 global policy instruments related to transparency and sustainability are already in place and we have a huge international consensus on corporate behavior. Under GRI standards, reporting is already increasing and we can now build on the consensus to further develop comprehensive reporting and monitoring systems.

But further progress will require a change of mindset – and this need was masterfully depicted in André Borschberg’s inspiring and heartening keynote that kicked off the main day of the event. “The technology is here – Changing the mindset is the only thing we need,” said Mr. Borschberg talking about his enterprise, Solar Impulse, which constructed a solar airplane that the aviation industry had said was impossible to make. Mr. Borschberg not only flew it around the world in 2015, he also broke the world record for the longest solo flight in any airplane.

The airplane, he said, was not built to carry passengers, but to carry a message: We need to reduce our carbon emissions – and we can do it. But it takes more time do de-learn the way we do things than to learn something new – and the important thing to remember is that it is not impossible. “This is what we heard about the solar plane,” said Mr. Borscheng. “We wanted to build a new paradigm. And this obviously was not impossible. We were convinced there was a way forward.”

And the best way to move forward and work toward changing the mindset, the conference agreed, is to ensure we have a shared and focused vision, and learn how to communicate and work together. As Valery Monk, GlaxoSmithKline’s head of third party oversight, noted, “Rather than doing everything make sure that every day you do something really, really well to progress our cause.”

On this quest, though, we will continue to meet those who say that whatever we want to achieve is impossible – and we will have to prove them wrong, whether we are talking about climate change, human rights or any other aspect that can contribute to a more sustainable world.

And it is great to see that this is already happening. Edgardo Greco, chief procurement officer at Rete Ferroviaria Italina (RFI), Italian state-owned rail company, noted, describing his company’s journey to sustainable procurement, how nobody believed it could be possible. “Everyone, including EcoVadis, told us that using CSR as part of EU Public Procurement was impossible,” said Mr. Greco. “And we just did it in 100 percent of our tenders.”

When we consider human rights and realize that as many as 40 million people around the world are currently caught up in the grip of modern slavery, staying ahead of traffickers seems an equally impossible task. “They are like hackers, always one step ahead of you,” observed Rosey Hurst, founder and director of Impactt, a U.K.-based charity working to eradicate modern slavery around the globe. But Ms. Hurst believes that with the right collaboration we may get closer to eradicating modern slavery in the next decade.

Ms. Sophie Lamb, partner at Latham Watkins, an expert in international arbitration, public international law and human rights counselling, was also optimistic and compared the current state of affairs on modern slavery to the way the western world dealt with corruption years ago. “It took several decades to get international consensus on corruption and get to the point that it is seen as reprehensible behavior. Eradicating modern slavery is on the same trajectory but it’s a highly expedited one,” said Ms. Lamb.

A crucial thing to remember and one that, again, came through in nearly all the sessions is the pressing need for collaboration: A collaboration between buyers and suppliers; between finance, CSR and procurement teams; and between international organizations, NGOs and business. Camille Alexandre, procurement excellence project manager at Amcor Flexibles, made a point in a discussion about her company’s journey toward circular packaging saying “Collaboration on circular economy could create two million jobs by 2030, up to $600 billion savings a year, which would allow Amcor to set a target of 100 percent recyclable packing by 2025.”

Meanwhile, in a session tackling supply chain disruptions caused by data breaches, Santtu Erkkila, Nokia’s supply chain information security program lead, stressed that third party security management program has to be a holistic and joint effort: “We won’t solve this on our own within IT/Security teams. We need to leverage the power of procurement teams,” he said.

Successful collaboration is also the key to driving change and innovation. Beatriz Mendez, chief procurement officer at Arkema, noted in a panel discussion that large companies are now mostly well equipped to address existing sustainability requirements but must not stop there: “We are beyond compliance. Now the issue is collaboration with suppliers to develop innovative solutions.” 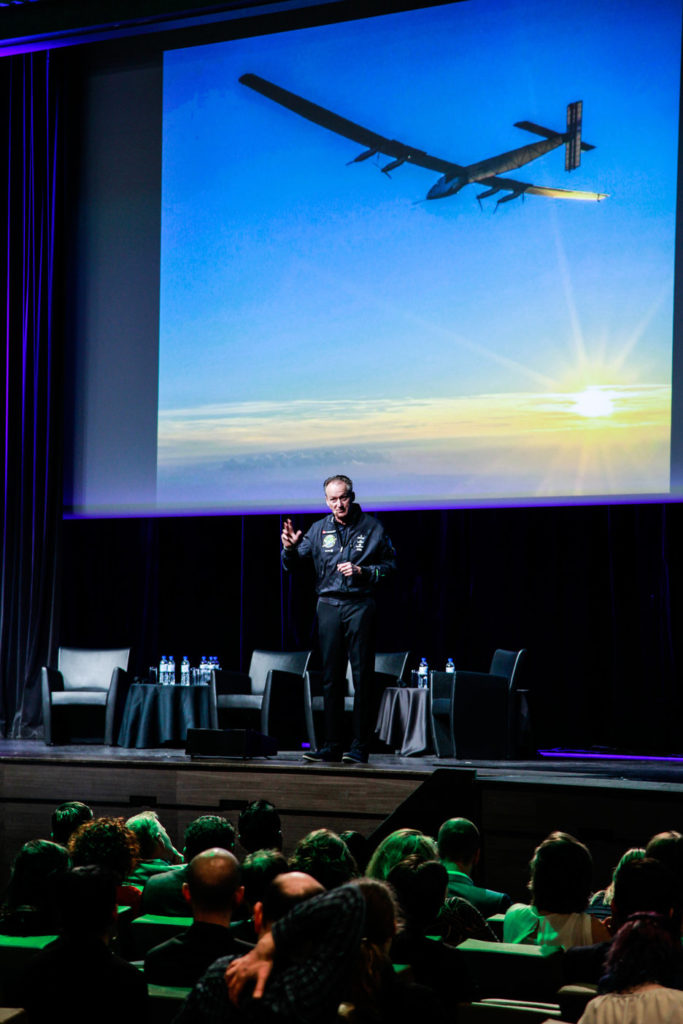 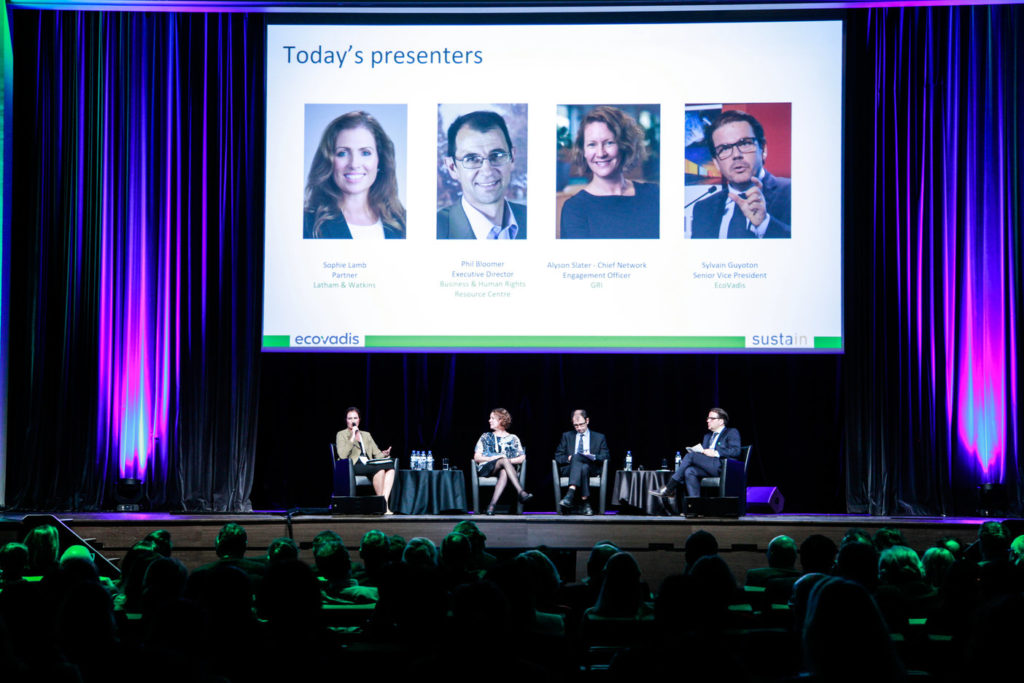 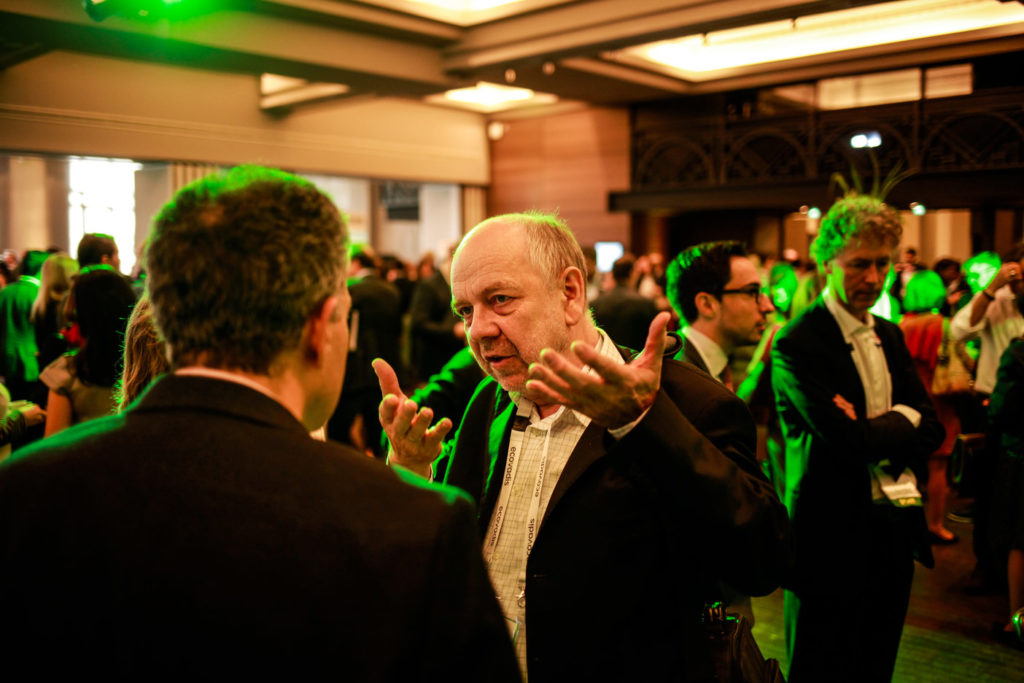 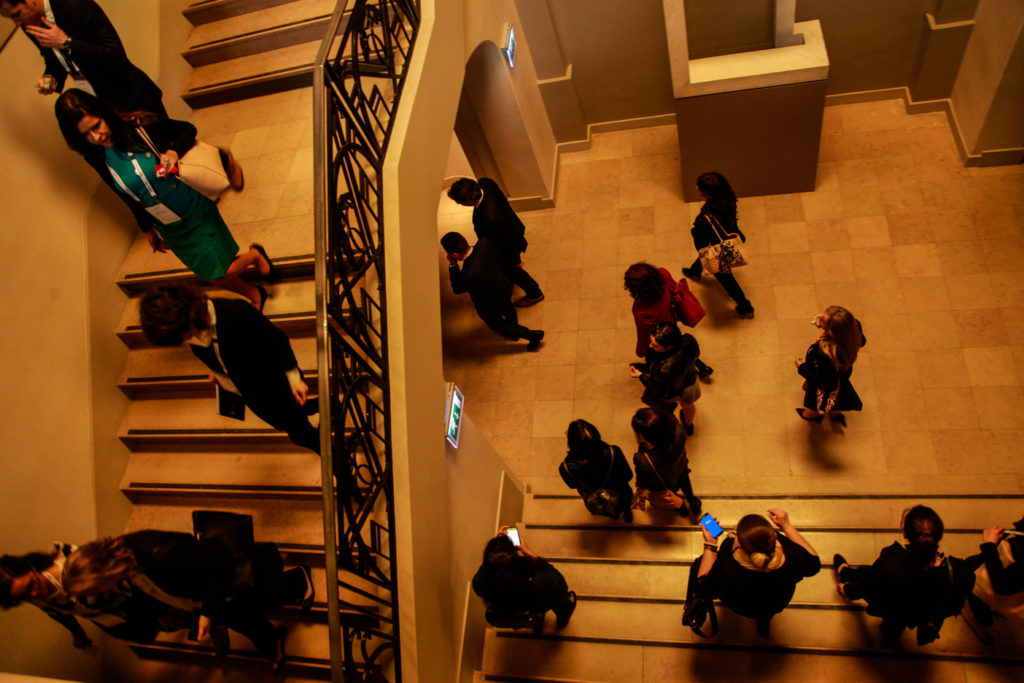 We are proud at EcoVadis to be able to contribute to this collaboration, foster innovation and promote better sustainability performance as the world most trusted provider of business sustainability ratings, intelligence and collaborative performance improvement tools for global supply chains. This why it was with great pleasure that during this year’s event we awarded once again sustainable procurement leaders – buyers and suppliers, companies and individuals – for their achievements in driving sustainability.

Find out more about this year’s categories and winners.

To all our presenters, speakers and attendees – a sincere thanks for your contribution and involvement. The event would not have been the same without you. 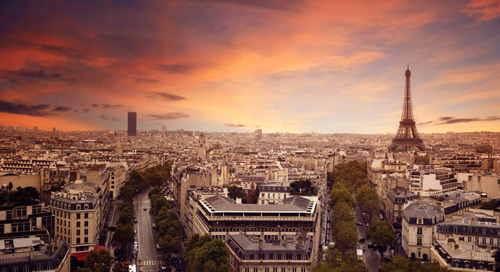 There is no question about that — it is hard to take time away from work. So any event you attend has to be... 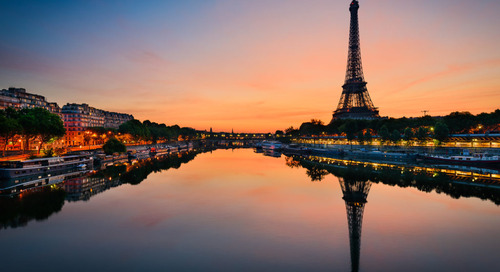 Sustain 2018: Now Is the Time to Transform Your Business

Exactly 20 months and 20 days before 2020, see why sustainability and procurement professionals believe we ...

Sustain 2021, the must-attend sustainable supply chain event, took place on March 8-9 with an exceptional lineup of speakers and sessions, urging us to #RethinkRebuild and set a new attendance record. 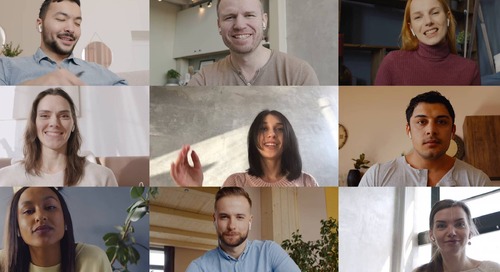 The world is crying out for a new, more sustainable direction. This is a global wake-up call. It is time to rethink and rebuild. 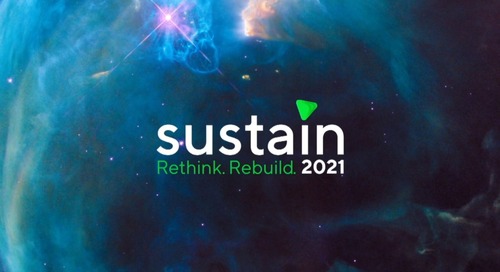 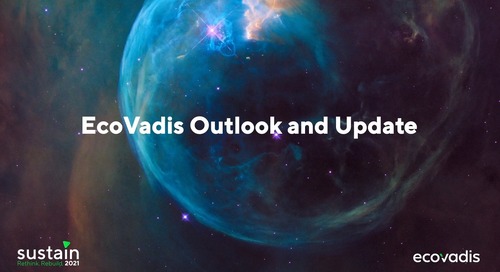 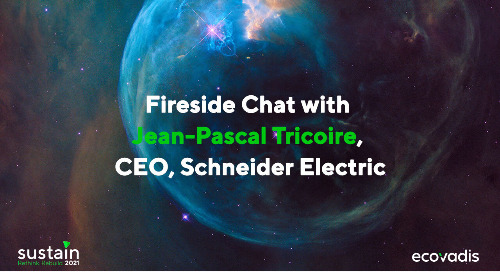 The world has changed in the wake of the pandemic and it is time to take stock and make sure we are on the right path for a more sustainable future. 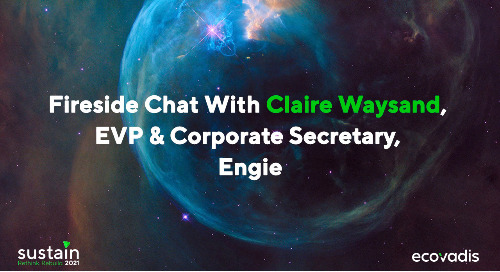 There is today a unique opportunity to shift the economy towards a more sustainable path. Energy transition and the fight against climate change are at the core of this 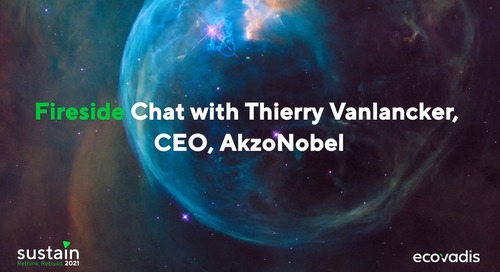 There is no longer a choice between profitability and sustainability, it is increasingly the same thing. 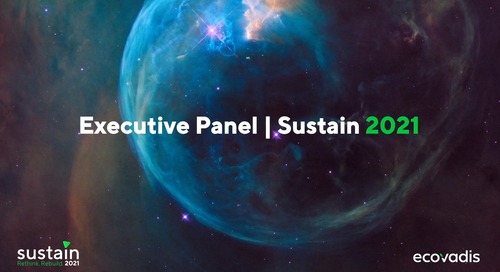 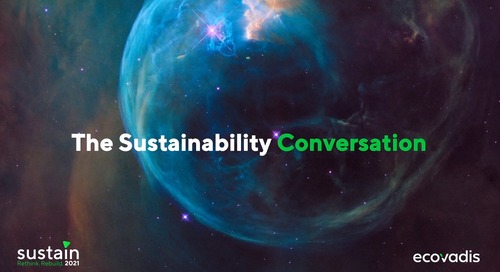 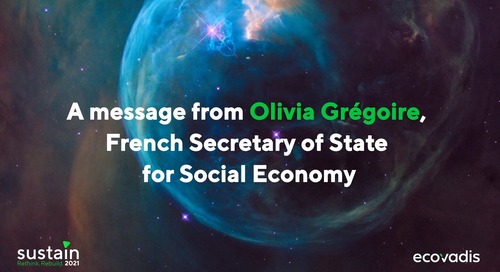 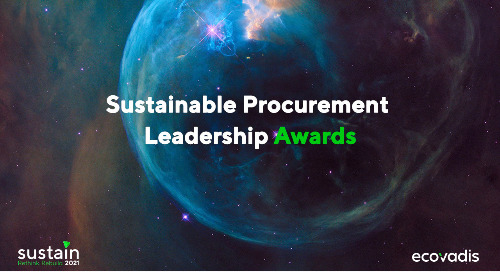 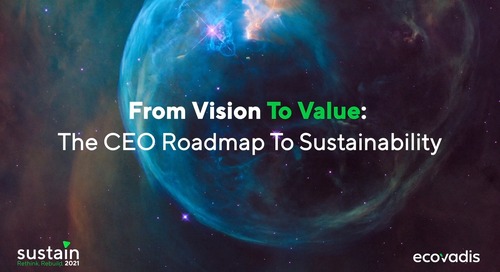 42:19
From Vision To Value- The CEO Roadmap To Sustainability

Gain insights from CEOs on how to pave the way for sustainable business and align corporate and sustainability strategies and goals. With speakers from GEKA, LC Packing and Viking Malt. 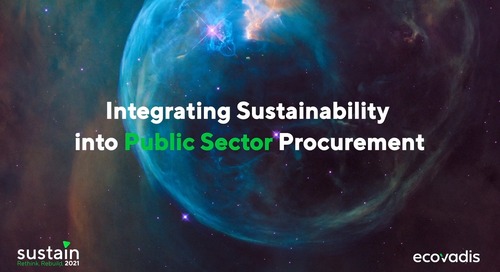 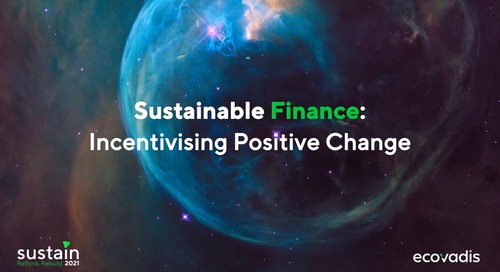 Experts share practices on how companies and financial services can work together to drive sustainability in the value chain. 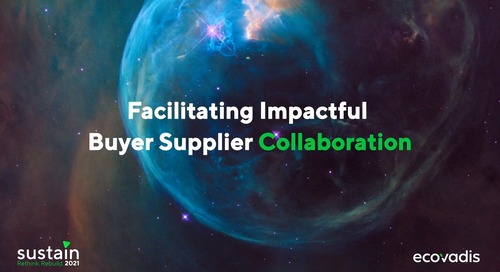 Discussion between buyers and their suppliers on how they collaborated to build a stronger and impactful partnership. 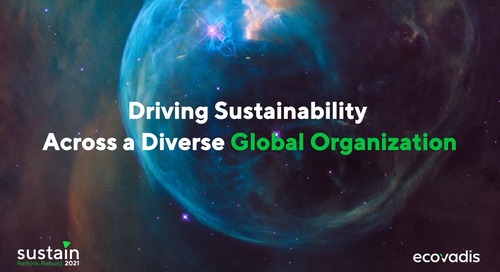 Multi-industry panel with leaders at the forefront of accelerating sustainability adoption and deploying global initiatives. 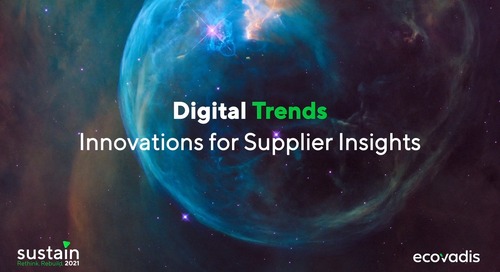 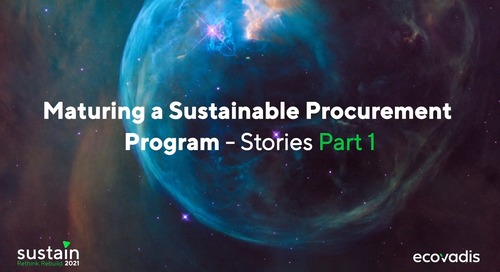 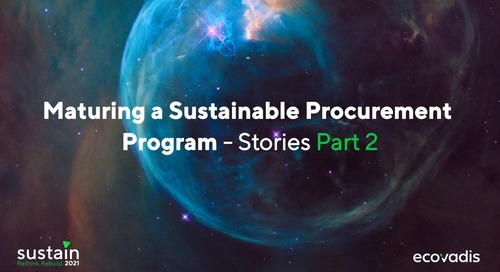 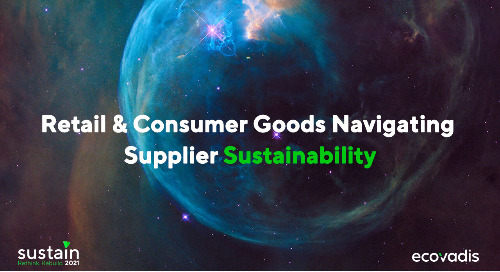 Hear from retailers and industry experts on how to navigate sustainability in global supply chains.