Exactly one month after Earth Day, the lesser-known but equally vital International Day for Biological Diversity on May 22 calls much-needed attention toward the global biodiversity crisis and reminds us that individuals, governments and businesses cannot thrive without healthy ecosystems.

The extent of biodiversity loss must be taken as seriously as the climate crisis: Our planet is undergoing a sixth mass extinction event, one that has been driven by economic growth and industrialization. The abundance of vertebrate species has declined by 60% since the 1970s, and ongoing extinction rates are thought to be anywhere between 1,000 and 10,000 times higher than historical levels. The alarming rate of biodiversity loss has coincided with the destruction of primary ecosystems: Since the industrial revolution began, human activity has significantly damaged up to 66% of marine and 75% of terrestrial environments and wiped out an astounding 85% of Earth’s wetlands.

Businesses now recognize that healthy ecosystems are essential for long-term sustainability as they regulate intangible systems we depend on for survival, from disease control to soil health. Recent events have also brought this truth to light. The global pandemic, locust infestations across East Africa (causing upwards of $8.5 billion in damages to local economies) and the rapid extinction of invertebrates (including insects and pollinators) prove that we are not immune to the far-reaching consequences of ecosystem collapse.

The good news is that biodiversity has taken the spotlight on the global stage and is considered the next leap ahead for corporate sustainability. Governments have already set ambitious conservation targets that will now depend on support from the private sector: At the One Planet Summit in January 2021, leaders from over 45 countries launched the High Ambition Coalition for Nature and People, an intergovernmental initiative that aims to protect 30% of the planet’s land and oceans by 2030.

Furthermore, the economic case for private-sector action has become clear: Intact ecosystems are estimated to be worth at least 100 times more than the material costs associated with preserving them. Meanwhile, a recent McKinsey study found that business-led efforts to protect 30% of Earth’s ecosystems could reduce CO2 emissions by 2.6 gigatons annually, create up to 650,000 jobs in nature conservation and support an additional 30 million jobs in other industries.

Bringing Biodiversity Onto the­­ Center Stage in Corporate Sustainability

Businesses should act now to make biodiversity a core pillar of their corporate social responsibility initiatives and integrate ecosystem protection into all levels of decision-making. Since Earth’s biodiversity is extremely complex, a one-size-fits-all solution will not work. Unlike the standard reporting frameworks that exist for monitoring carbon emissions and pollution, there are no universal measurements or reporting units for biodiversity. Most proxy indicators of ecosystem health are labor-intensive and under-researched. This makes it difficult for businesses to measure and scale their impact across global operations. To overcome these challenges, businesses can take an adaptive, think local, act global approach underpinned by bottom-up initiatives and stakeholder involvement.

Focusing Efforts on the Most Severe Biodiversity Risks

Companies should identify direct ecosystem threats and dependencies within their value chains and understand how their own activities may contribute to biodiversity loss. Proactive measures should be adapted and applied at regional scales to reduce the most severe impacts on land and water. For the food production, tourism, agriculture and forestry industries in particular, biodiversity risks tend to concentrate upstream where there is intensive harvesting of natural resources through deforestation or monoculture production systems. Here, procurement programs should aim to source raw materials that are produced using regenerative agriculture practices such as intercropping and reduced tillage. Procurement decisions that incentivize long-term ecosystem and soil health can greatly reduce financial risk and create a more resilient value chain.

Capacity building with suppliers and business partners is also needed to develop regional goals and methods. Engagement and open communication at the regional level can help foster strong commitments to protect biodiversity and ecosystems. Further downstream, businesses can mitigate risks and reduce ecological damage by integrating circular design into their products and operations, where waste production (outputs) and demand for natural resources (inputs) is minimized.

Where ecological risks are low or less direct, businesses can practice responsible corporate citizenship through engagement in community-based projects and organizations. Community-run initiatives are often better equipped to protect local habitats and endangered species such as insects and bees. Support and engagement in these projects can have a major impact and help businesses build a strong connection with local stakeholders.

Working together is essential. Involvement in cooperative and multilateral networks can help businesses share knowledge, collaborate and take leadership on the biodiversity crisis. There are already several international initiatives in action, such as the Global Partnership for Business and Biodiversity, a platform that connects businesses to 21 national biodiversity and nature conservation programs. The World Conservation Union, founded in 1948, is a public-private partnership spanning 125 countries with a mission to protect biodiversity through scientific research and nature conservation. The Natural Capital Protocol is a coalition of 300 organizations that aims to understand and measure the impact of human activity on the environment. Numerous regional and product-specific coalitions have also formed, and interest in these networks is growing.

The next 10 years will mark a critical turning point for the planet – one where our collective decisions will determine what is left behind for future generations. We have already seen that strong cooperation between businesses, governments and individuals is needed to fight the climate crisis. The same level of urgency must now be directed to protect Earth’s biodiversity.

Ecosystem health and biodiversity are core criteria within the EcoVadis Sustainability Ratings. Our methodology considers ecosystem and biodiversity impacts that are specific to industry sectors, company size and country, and delivers ratings that can be integrated into procurement programs and used to monitor performance over time. With our help, companies can identify and mitigate biodiversity risks, strengthen their efforts to protect ecosystems across global supply chains and harness the benefits ecosystems provide. 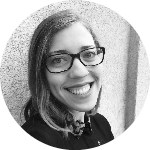 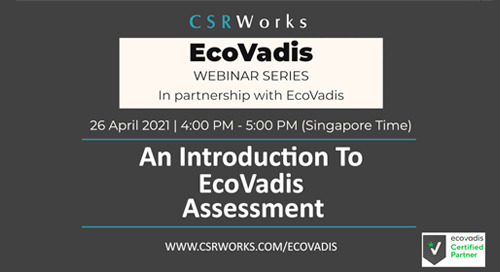 [CSRWorks] An Introduction to the EcoVadis Assessment

This webinar, the first of a four-part series co-hosted with CSRWorks, introduces the EcoVadis assessment p... 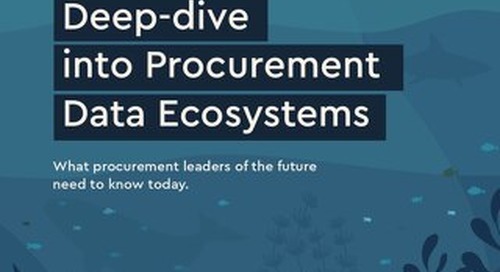 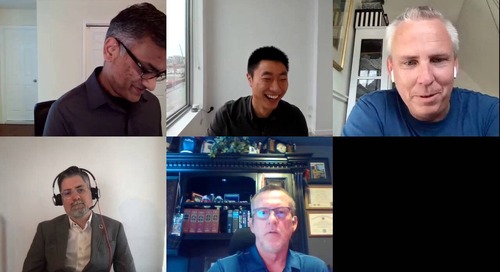 32:07
[Procurement Foundry] How to Make Best-of-Breed Solutions Part of Your Strategy

While Best-of-Breed ("BoB") solutions can be a revolutionary opportunity, they can also present their own set of challenges when adopted into your organization's procurement strategy. 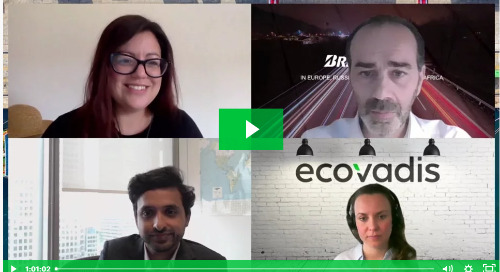 1:01:02
[CIPS] Do you need to compromise for a more sustainable supply chain?
Watch Video 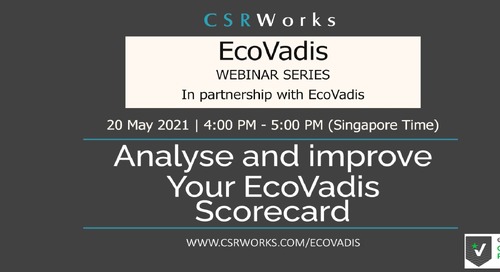 50:17
[CSRWorks] How to Analyse and Improve Your EcoVadis Scorecard

This second webinar of the 4-part series discusses how to understand your risk profile and how that can help to optimize your EcoVadis score. 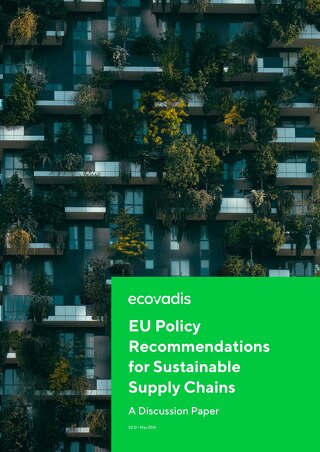 This paper provides comments & recommendations on Green Deal-related policies based on our expertise from working with over 75,000 companies to improve sustainability performance in supply chains. 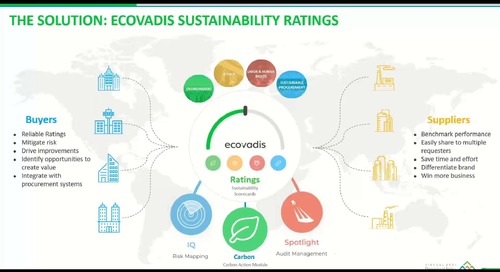 This webinar shares best practices and discusses the latest trends in mitigating risks from vendors and suppliers. 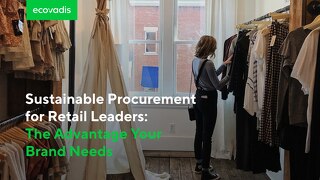 Sustainable Procurement for Retail Leaders: The Advantage Your Brand Needs 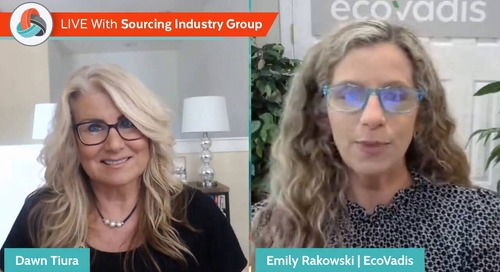 Learn about four key factors to rethink your supply chain and steps practitioners are taking to accelerate a sustainable procurement program and take action to thrive in the new normal.

43:31
[CSRWorks] An Introduction to the EcoVadis Assessment

This webinar, the first of a four-part series co-hosted with CSRWorks, introduces the EcoVadis assessment process. 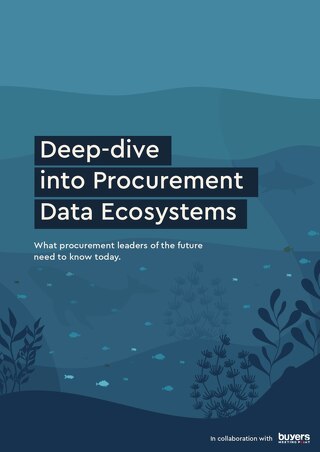 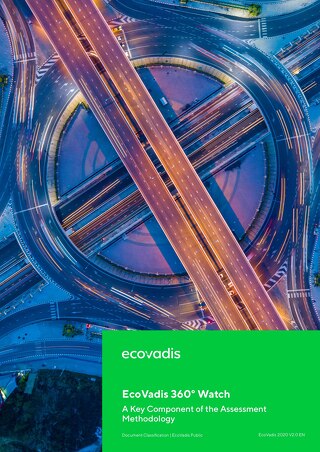 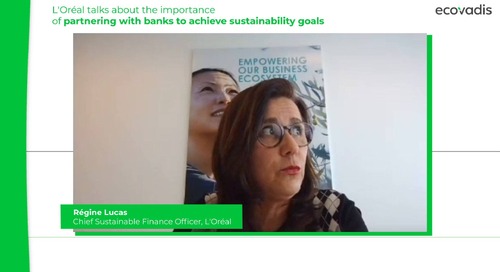 2:00
L'Oréal Talks About the Importance of Partnering With Banks To Achieve Sustainability Goals 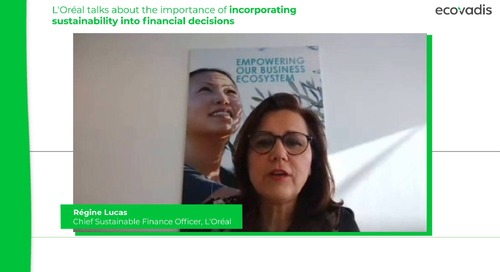 1:48
L'Oréal Talks About the Importance of Incorporating Sustainability Into Financial Decisions

L'Oréal talks about the importance of incorporating sustainability into financial decisions 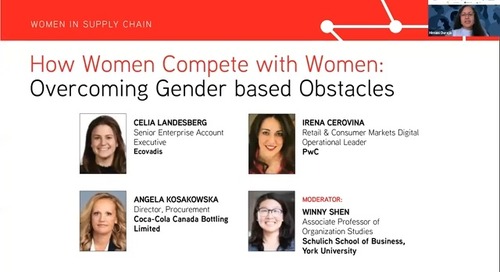 Panelists discuss how to create a win-win scenario with same-sex competitors who may feel threatened - How to deal honestly with conflict in the face of unfair competition. 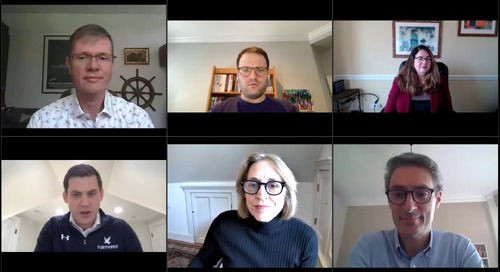 57:37
[Fairmarkit] Sourcing Your Way to a Sustainable Future

Learn how to make sustainable procurement a key focus and create alignment throughout the organization to ensure sustainability is at the forefront of your procurement strategy. 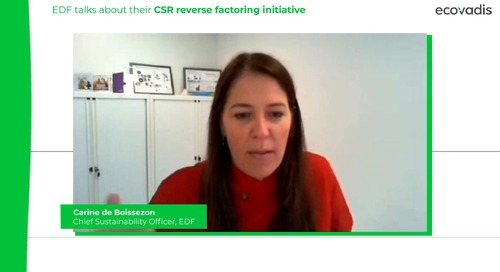