Home » Sustainable Procurement » Exploring Global Sustainability Performance From 2015 to 2020: Progress Is Being Made Globally – Europe Leads the Way
× Share this Article

Published in partnership with le Médiateur des entreprises – the French government’s Business Relations Mediator – Measuring the Sustainability Performance of European Companies 2021 explores the sustainability progress made by companies in the EcoVadis network across Europe, the OECD and the BRICS countries from 2015 to 2020. Here, we explore some of the key trends that emerged from the report.

The report analyzed more than 90,000 sustainability assessments carried out by EcoVadis on almost 50,000 companies from 2015 to 2020. These companies span a wide range of regions, industries and sizes and vary in the number of assessments they have undergone. Scored on a scale of 0-100 based on their performance on four core themes – Environment, Labor & Human Rights, Ethics and Sustainable Procurement – the companies were then grouped into four broad categories reflecting the maturity of their sustainability management system. Achieved by less than 10% of all companies, a score of 65 or more puts a company in the “exemplary” category, indicating it possesses a comprehensive and innovative system backed up by rigorous reporting and external recognition. The vast majority that didn’t make this upper tier fell into the “good” (45-65), “partial” (25-45) or “insufficient” (below 25) categories.

Companies Around the World are Making Progress on Sustainability

Companies around the world have made significant progress on sustainability in recent years, with the average EcoVadis assessment score increasing by 11% over the six-year period – from 42.6 in 2015 to 47.4 in 2020. Though performance varies widely based on region and theme, companies in virtually all of the countries represented have made improvements since 2015. However, much work remains in areas like sustainable procurement, where even companies in leading countries have regressed over the past couple of years (with Germany and Italy being notable exceptions).

Our rapidly growing dataset enabled us to analyze the progression of a particularly committed subset of 2,342 companies (representing 14% of the total) evaluated in 2015 and again in 2020. The Sankey diagram below shows the movement of these companies between sustainability management levels over this period and reveals the following:

The tripling of the “exemplary” companies points to the rapid evolution of corporate sustainability over a relatively short period of time. While these new high sustainability performers primarily come from companies assessed at a “good” level in 2015 (62%), 10% come from lower-rated companies that made exceptional progress in just six years. Once companies reach the exemplary level, 81% have been able to maintain this performance over time – a testament to the reinforcing nature of a robust sustainability management system.

In 2020, Europe – and the EU in particular – maintained its position as the global sustainability leader and continued its upward trajectory. Bolstered by the progress of EU member states like Switzerland, Japan, Canada and the UK, the OECD is also making solid progress. The BRICS countries continue to lag behind, though the improvements made by Brazil and South Africa are promising.

With an overall score of 52.5 in 2020, the EU outperformed the global average of 47.7 and surpassed the 52.1 achieved by Europe as a whole. Its strong performance is the primary reason the global average increased by 1.1 from 2019, as other major regions like North America (46.5) and Asia/Middle East (42.7) continue to lag behind. Within Europe, the Nordic countries, France and the UK (see the spotlight on the UK below) have been performing particularly well. Despite a small drop in overall performance from 2019 to 2020, Finland remains the clear leader, with its companies achieving an average score of 55.9 and its large companies cresting the 60-point mark on average. Sweden and France round out the top three with overall scores of 54.4 and 54.3 respectively. The UK, Italy, Norway and Spain follow close behind, with only one point separating this group’s performance (view the chart).

OECD: The average score in 2020 for all OECD-based companies was 51. The 38 OECD member countries stretch across the globe, from North and South America to Europe and Asia-Pacific. Building on solid progress made in 2019, North American companies continued to edge closer to their high-performing European counterparts in 2020. Japan, the second-largest economy in the OECD behind the US, saw the sustainability performance of its companies largely stagnate at around 44 from 2015 to 2018; however, it made solid gains in 2019 and 2020 to reach an overall mark of 46.7 (view the chart).

BRICS: The regional average for companies based in Brazil, Russia, India, China and South Africa was 38.3 in 2020. The performance of companies in Brazil and South Africa greatly exceeds that of companies in India, Russia and China, which made limited progress over the six-year period. However, the 2020 average for Indian companies of all sizes is now higher than the BRICS average – a positive trend for one of the fastest-growing global economies (view the chart). 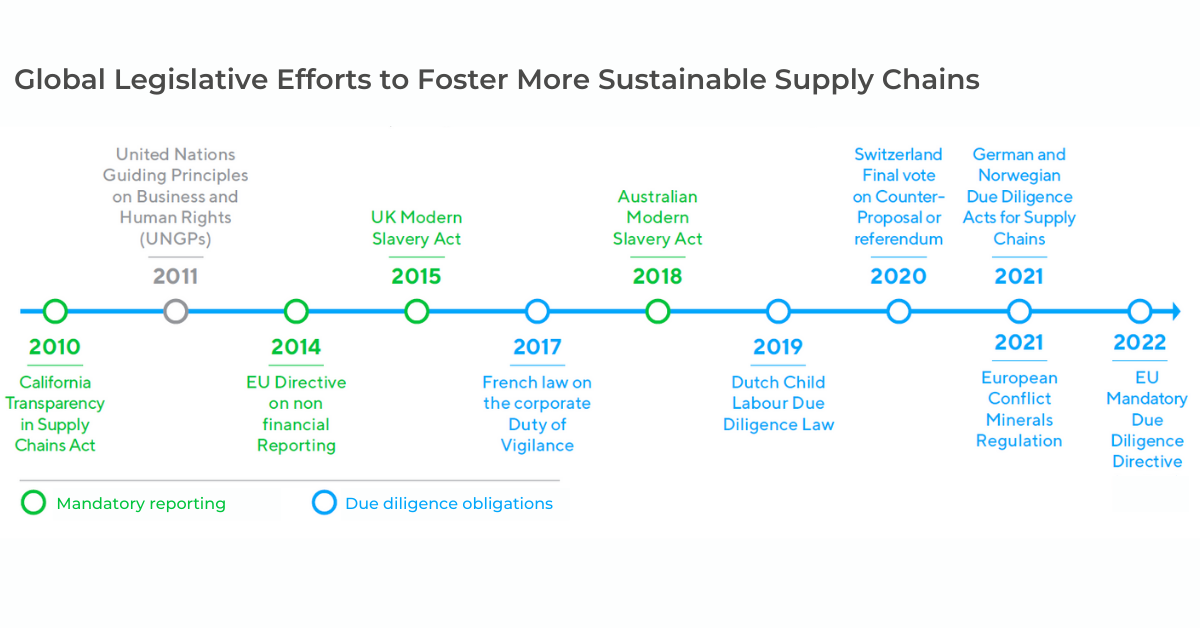 Between the publication of the French report in December 2021 and its translation into English, the European Commission adopted a proposal for a Directive on Corporate Sustainability Due Diligence. While the Directive is currently set to cover only a small percentage of EU companies, including those with over 500 employees and some smaller companies in high-impact sectors, it lays the groundwork for an organizational and supply chain sustainability framework that will undoubtedly cover companies of all sizes in the future. This Directive, in combination with recent national legislation like Norway’s Transparency Act and Germany’s Supply Chain Act, appears poised to drive improvements in corporate sustainability performance – not just for EU companies but also for UK and other non-EU companies that operate in the region and fall within the scope. 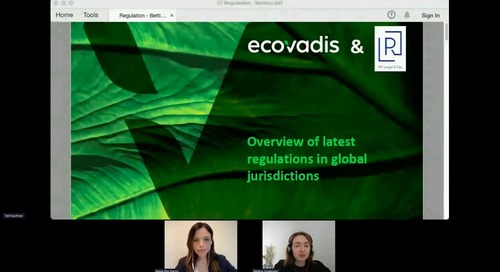 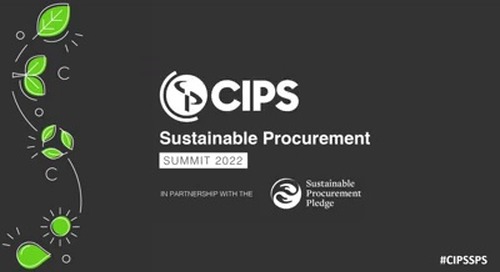 [CIPS] How to Meet Corporate Sustainability Goals Through Responsible Sourcing

Watch a recording of the fireside chat between David Deakin, CPO at Rolls-Royce, and Lazar Armianov, Region... 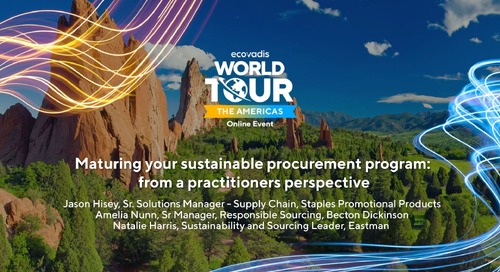 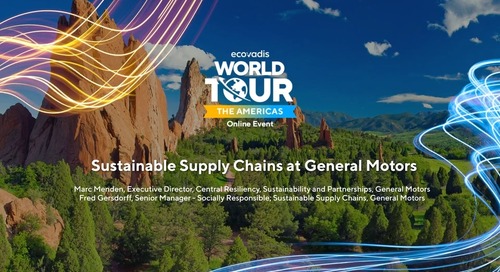 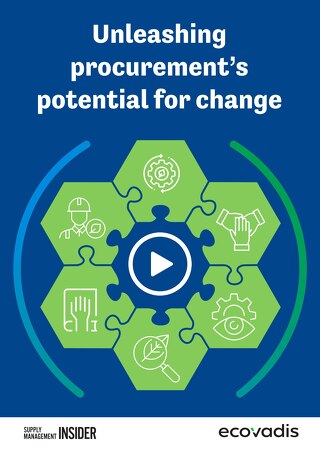 This whitepaper presents, analyses and interprets the results of that research and recommends practical steps organisations can take to ensure they have all the success factors in place. 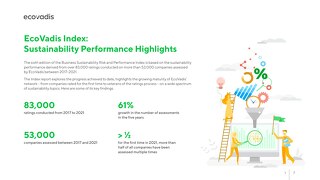 ​​See key findings from the sixth edition of the Business Sustainability Risk and Performance Index: Insights from Global Supply Chain Ratings, an analysis of 53,000 companies across the globe. 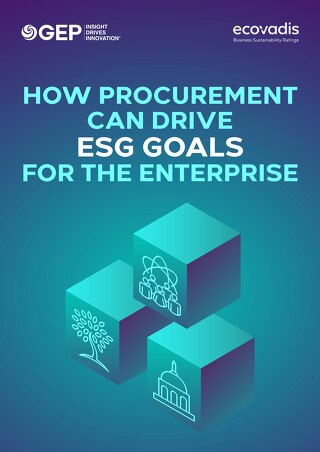 How Procurement Can Drive ESG Goals for the Enterprise

An enterprise’s environmental and social impact has a lot of components — the raw materials it sources, how it runs operations, and how goods are packaged and delivered. 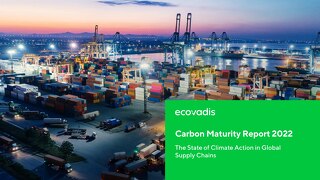 Corporate leaders who have embedded climate goals in their procurement approach are making strong progress on tackling supply chain emissions. This report shares insights from over 15,000 companies. 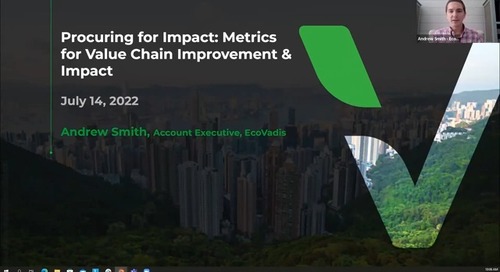 While the Covid-19 crisis provoked procurement teams to rethink their supply chain strategies new forces are causing leaders to raise the ambition of their sustainable procurement programs. 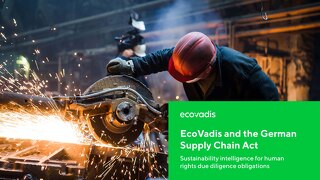 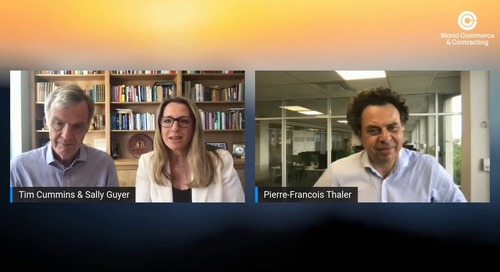 15:28
[World Commerce & Contracting] #DestinationImpact – What Role Will You Play? 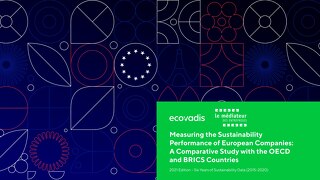 Measuring the Sustainability Performance of European Companies : A Comparative Study with the OECD and BRICS Countries

Developed in collaboration with the French government, this report explores how companies across Europe, the OECD and BRICS performed on key sustainability topics from 2015 to 2020. 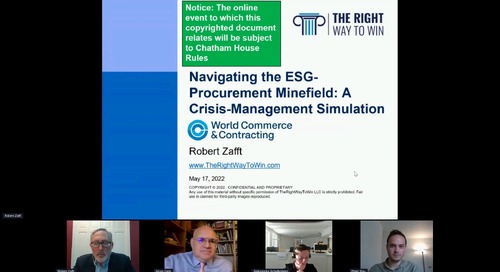 This crisis-management simulation hosted during WCC's World Sustainable Contracting Day invites you to help select sustainable vendors, then work with panelists to steer through ESG challenges.

31:10
[CIPS] How to Meet Corporate Sustainability Goals Through Responsible Sourcing

Watch a recording of the fireside chat between David Deakin, CPO at Rolls-Royce, and Lazar Armianov, Regional Director, Northern Europe, Middle East &amp; Africa at EcoVadis, which took place at the 2 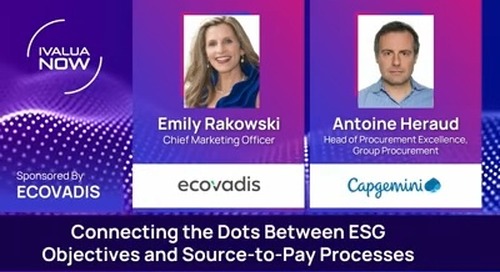 49:19
[Ivalua] Connecting the Dots Between ESG Objectives and Source-to-Pay Processes

A panel of experts from EcoVadis, Capgemini, and Ivalua will share best practices on how organizations can integrate ESG initiatives into their Source-to-Pay procurement processes. 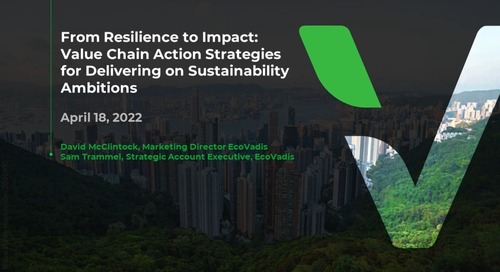 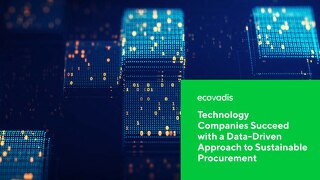