This December, the 21st annual Conference of Parties to the Kyoto Protocol, or COP21, will take place just across town from EcoVadis’ Paris headquarters. There has been considerable focus on this meeting as an opportunity to agree to an international, binding agreement to reduce greenhouse gas emissions. So what do practical parties want to happen at COP21? 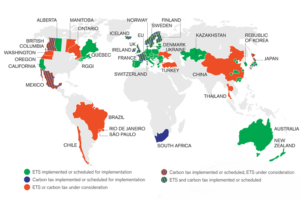 Lets start with what’s already happened. The most effective measures to reduce greenhouse gases (GHGs) have come from sub-national, national and multi-national regulations to put a price on carbon. A World Bank report released last year does a great job mapping these regulations:

According to the World Bank, the goal of these regulations is to “capture what are known as the external costs… that the public pays for in other ways, such as damage to crops and health care costs from heat waves and droughts or [damage] to property from flooding and sea level rise – and tie them to their sources through a price on carbon.” As of last May, there were 39 countries and 23 regional governments that either had carbon pricing mechanisms in place or scheduled for the coming years. The World Bank calculated that these 62 governments were putting a price on 6 gigatons (that’s 6,000,000,000,000 kilograms!) of carbon dioxide equivalent. Altogether these emissions are valued at $30 billion.

Though all of this is exciting, the current status quo has some shortcomings. For one thing, the World Bank estimates that only ~12% of global emissions are currently priced under these regulations. For another, the prices are highly volatile with changes at a moment’s notice and, in some cases entire pricing mechanisms are threatened by political opponents. At the low end emissions are price at less than $1/ton (E.g. Mexico, New Zealand) while at the high end the price is set at $168/ton (Sweden).

With this sort of uncertainty, these regulations could be perceived as bad for business. However, many businesses disagree. Llast year the World Bank counted in excess of 1000 companies and investors who advocated setting a price on carbon. Furthermore, 150 major companies who disclose emissions to the CDP have preempted regulations by voluntarily establishing their own in-house prices on carbon. In that same CDP report, the corporate voice in favor of GHG emissions pricing gets even louder:

“The world’s largest companies are outpacing their governments in responding to climate change and expect carbon to be priced.”

“These companies want, and are calling for, clear pricing and regulatory certainty to help them plan their climate-related investments, and they want to see more certain, internationally linked carbon markets.”

“638 companies [who report to the CDP] disclose that regulations related to carbon pricing (cap and trade & carbon taxes) present an opportunity for their businesses.”

The same report quotes EcoVadis client, Alstom, lauding GHG pricing “as an opportunity to provide related products and services,… far from being detrimental for Alstom (e.g. increased operational costs), [that] helps the commercialization of newer technologies.”

So how do we strengthen our carbon pricing systems and achieve what the corporate world says is possible and necessary? The World Bank’s 2014 report highlights Professor Gilbert Metcalf’s insight on linkage, which is the reciprocity of of emissions allowances between different regulatory frameworks. Speaking about the potential outcomes of COP21, Metcalf says that linkage “increase[s] the likelihood of achieving – in a cost-effective and hence politically feasible manner – what will be significantly more ambitious emission reduction requirements after 2020.” California and Quebec have paved the way for future considerations by formally linking their cap-and-trade programs since the start of last year.

A collaborative report from the Green Alliance along with the WWF, Greenpeace and others, digs deeper into the economic benefits of a successful outcome in Paris at COP21. The report confronts the criticism of uncertainty, explaining that “A strong deal will… provide a clear signal to business, creat[ing] a simpler, more predictable framework for companies operating in different countries.” The authors expand upon the business opportunities that would arise from an agreement: “markets in low carbon goods and services now amount to £3.4 trillion and have outperformed the mainstream economy since the onset of the financial crisis.” Dr Jim Yong Kim, president of the World Bank Group, has asserted, “Taking action now will not only solve the problem of protecting the planet, but it will be a tremendous boost for economies.”

This momentum continues as we head toward COP21: Recently B Team, a growing group of CEOs who want to change business for good, including the heads of Unilever, Virgin Group and Tata International, “called on world leaders to agree to bring the balance of greenhouse gas emissions to zero by mid-century in a global climate change deal to be finalized in Paris in December.”

First published in the Sustainable Supply Views blog from EcoVadis 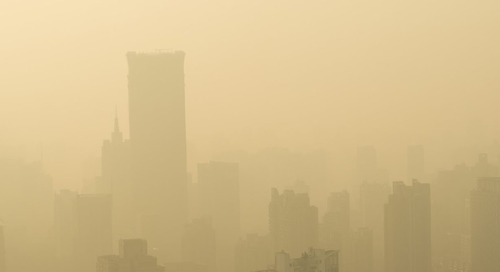 China is home to some 30% of the companies who are assessed by EcoVadis. If your company or supply chain ha... 2020 VISIONS FOR ECOVADIS What will the sustainable business agenda look like in 2020? And, to take that qu...